Someone used the R-word before June 15 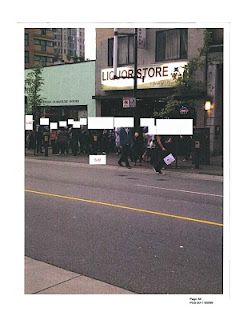 That is a photograph of a line-up of thirsty Vancouver Canucks' fans snaking along the sidewalk outside the Spirit of Howe private liquor store at 1275 Granville Street on June 10, the night the Canucks won Game 5 of the Stanley Cup final at Rogers Arena. The government-censored photo was included in documents released via Freedom of Information on Sept. 21 in response to a request I filed. (The people were on a public sidewalk, so why censor them?)

The photograph is the only one included in the 97 pages from the Solicitor General's ministry, which is responsible for the Liquor Control and Licensing Branch. These documents give a glimpse inside the planning for the early closure of liquor stores in downtown Vancouver on June 13 and June 15 during the Stanley Cup finals. For the first time, we find a public official using the R-word (or a variation thereof) before the Game 7 riot.

"We are expecting record crowds (for Game 6 on June 13) as this may be the deciding game, and given the escalating problems, intoxication, violence and pre-riotous behaviour, I have made a decision under the Liquor Licensing and Control Act to close all liquor stores in the downtown Vancouver core at 4 p.m. tomorrow evening. ”

Chief Jim "No Clue" Chu famously proclaimed before Game 7 to Mike Howell of the Vancouver Courier: "There's not going to be a riot." The VPD internal report released Sept. 6 claimed: “Prior to Game 7, there was no substantiated intelligence that a riot would occur.”

Read the full story in TheTyee.ca here.
Posted by Bob Mackin at 5:31 PM