Five years ago today: where were you when the roof went down?

It was a cold day with occasional drizzle, even wet snow. I was watching the World Junior Hockey Championship final broadcast when a friend frantically called and told me to turn on CKNW, because the B.C. Place Stadium roof collapsed. (This is how it all went down.)

I did, then hastily called a source who might know what really happened. What an embarrassment for the 2010 Olympic stadium! I was told the roof had numerous patches and that management cut back on use of the snow melting system. For the next week, B.C. Place management denied snow was a factor, despite the evidence I was supplied.

Reporters allowed into the east airlock of the dome were speechless at the downed roof, damaged equipment, puddles of water and piles of snow. Here is my report from Jan. 5, 2007.

A year later, a Geiger Engineers report (dated Oct. 12, 2007) was issued that confirmed it was preventable. Snow had accumulated and five snow alarms ignored. Finally the air pressure was frantically increased, the snow avalanched and ripped the roof. PavCo called it a controlled deflation but my sources told me that chaos reigned while the big top came down. There is even more in this report by the B.C. Place joint health and safety committee.

On Jan. 19, 2007, the patched roof was reinflated. A major renovation, including the new roof, was announced by Premier Gordon Campbell on May 18, 2008. A heavy-duty roof heating system by Genivar was installed before the 2010 Winter Olympics. If you went to B.C. Lions' games in 2009, you may have spotted those big, white bent finger pipes in each of the corners. The roof barely made it through the Olympics. The weight of lights and speakers caused it to flatten. Crews were stationed atop the roof around the clock to prevent big puddles that could have ripped the roof. That almost happened on Jan. 14, 2010.

The roof was finally deflated for good on May 4, 2010. 24 Hours' videographer Mark Yuen shot the definitive time-lapse video of the historic morning. Some of the material was shipped to Celista, a community near Kamloops, where it is now a liner for an outdoor hockey rink. The rest went to Minnesota for repurposing. Some of the material was kept for a B.C. Sports Hall of Fame fundraiser.

A German-engineered retractable system is being installed. Fall and winter winds have not been kind to the construction schedule. All 36 cable-support towers were supposed to be installed by the end of 2010, but the last three may not be done until Jan. 9. B.C. Pavilion Corporation is sticking to its "early fall" completion and subsequent opening. Chairman David Podmore said in November he'd have a better idea in March. An Aug. 20 construction committee document, however, says Nov. 1, 2011 is the estimate for "substantial completion." The Vanier Cup (Nov. 25) and Grey Cup (Nov. 27) are the only confirmed events.

The B.C. Lions and Vancouver Whitecaps are at the mercy of PavCo, which is ultimately at the mercy of construction-safe weather conditions. The Caps and Leos will both start their seasons at Empire Field but are selling tickets based on moving into B.C. Place in September.

UPDATE: B.C. Place reopened on Sept. 30, 2011. Documents show the stadium remained a construction site when 50,213 people were there. Area neighbours continue to complain about the bright lights from the Telus-installed advertising video screen at Terry Fox Plaza. The budget for the renovation was $563 million, but PavCo is stalling the release of several Freedom of Information requests that would show whether there are indeed major overruns. Two key contractors are suing each other for millions of dollars and, in the process, exposing the troubles of the renovation.

As for the roof? I shot photographs during the Winnipeg Blue Bombers' Grey Cup week practice on Nov. 25, 2011 -- the day after heavy rains hit the Vancouver area and caused more leaks. Notice the makeshift barriers of the area drenched by leaks from the new roof. 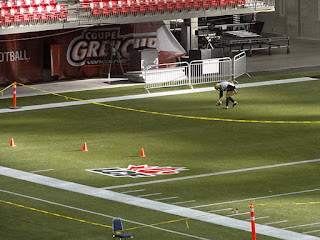 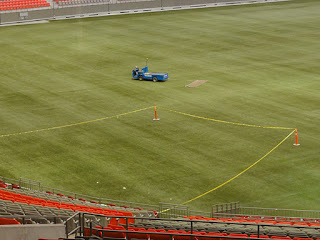 Vancouver was hit by heavy rains again Jan. 3-4. The same area of the B.C. Place field's east end was again cordoned off when I visited the B.C. Sports Hall of Fame on Jan. 5 (below). Construction workers in hardhats and safety vests were seen on the roof and ring beam around 11 a.m.

Similar leak problems dogged Frankfurt, Germany's Commerzbank Arena for many months after it opened in 2005 with a retractable roof system that inspired the B.C. Place renovation.
Posted by Bob Mackin at 9:30 AM